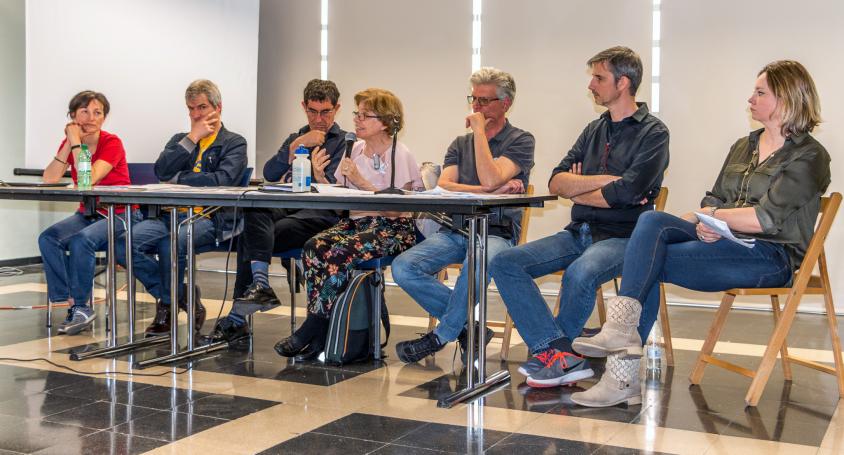 Before entering the heart of the debate on what is Good Knowledge, I would like to clarify the position of Universalist Humanism on some topics related to the concept of knowledge. My reference is the work of Silo Psychology Notes.

When we speak of knowledge we refer to a specific way of working of the human psyche against the external world. Our species has unique psychological abilities: we imagine things that do not exist; we think abstractly; we transfer ideas through spoken and written language; we create entertainment activities such as art, music and literature; we behave according to cultural rules and traditions; we invent new objects and concepts that make up technology and science. We have gone from the first groups of hunters and gatherers to the great empires of the last five thousand years, with organizations of millions of individuals, now converted into billions. This path of our specie can be seen, from the point of view of knowledge, as the birth, accumulation and continuous correlation of an increasingly vast and articulated corpus of informations, communications, learnings, meanings and representations.

A man in the eighteenth century managed to read all the books available at the time. Today, obviously, this is impossible, because knowledge has increased exponentially thanks to the possibility of electronic archiving. And this without counting the unwritten knowledge: practices of hundreds of manual works and arts transmitted from teacher to student; cooking recipes of forgotten traditions or the wisdom of the meditations of small cults, just to mention some things that we will never find in books.

But we have not yet entered into the question: the nature of human knowledge.

Silo affirms that conscience is active and intentional. It constructs its representations (that is, knowledge) on the basis of a constitutive intentionality that completes each mental act with perceptions, memories and imaginations. The conscience is not passive towards the world, because thanks to representation and action, it contributes to transform the world according to the individual direction. At the same time, the conscience is constituted by the world, as it provides the material to its functioning. In short, thought takes place within the body, and comes out through action, and the world enters in the mind with the stimuli, forming an interdependent structure that Silo calls conscience-world. Thanks to this structure, simple information becomes knowledge, because there is an individual who acts in the world with a precise interest. Knowledge is not neutral, but is significant for those who own it, because it is related to their needs and aspirations. Knowledge is an aspect of the conscience-world structure of which each human being is a part: it is not an endless series of statements about reality, more or less true, but a continuous process in which each individual, with its existence concrete, is involved in an inseparable relationship with other human beings.

More over, knowledge not only implies the understanding of phenomena, but also a mind aware of itself. From Socrates, who affirmed the importance of recognizing that "we only know that we do not know", we have inherited the value of reflecting on ourselves and our cognitive processes in order to see the situation of ignorance in which each one finds himself and to feel this vacuum of knowledge as the motor of the desire to learn without limits. Our ignorance is part of us, and recognizing it, in a humble but courageous impulse, imposes the responsibility of continuing to increase our knowledge, in an endless evolution, as individuals and as a species. Even Descartes, with his Cogito ergo sum (I think, therefore I am), brings us back to fundamental knowledge: behind all knowledge there is a mind that uses and correlates it, a mind aware of be a mind. In this complex age, in which we human beings dream of reaching Mars, we explore territories never explored before, in which we ask ourselves what is the external limit of our Universe, pushing us more and more towards the outside of our perception, we are more and more an interiority who discovers itself, a mind that wants to know how it was formed and how it works, what are the limits and possibilities of its internal perception, in a process of deepening that is fed back virtuously, going beyond the cultural and psychic limits towards new stages of conscience development.

So, when we talk about GOOD knowledge, what do we mean?

Behind every knowledge there is a mind that uses it according to a specific direction of the subject. This direction has to do with the basic desire to avoid, diminish or stop the pain and suffering that the human being experiences in his life. Although the life of each one can be very variable, there is a direction that has been guided our species for thousands of years, and it is to avoid pain and suffering and to seek pleasure, in a continuous movement of escapes and approach. This impulse has become an individual and collective aspiration towards overcoming pain and suffering by transforming the conditions in which each person finds himself or herself. The first revolution in human cognition has been to realize that hostile conditions can be changed and that we can operate voluntarily to do so. Silo affirms that, depending on what we do towards pain and suffering, our existential horizon can be of three types: of maladaptation -when our influence in the world diminishes-, of decreasing adaptation -when we accept the established conditions- and of Increasing adaptation - when we increase our influence, we rebel against the conditions that create pain and suffering, we decide to change them and, therefore, we expand personal and social freedom. In all three cases, the choice concerns the individual, but affects all the people with whom he is related.

Any knowledge can take three different values ​​according to the choices of each human being. All knowledge conceived and used to overcome pain and suffering, for the creation of vital horizons of increasing adaptation, represents a GOOD knowledge. In itself, knowledge is neither good nor bad. Good or bad is the direction of human actions, but not by moral judgment.

Knowledge is the process by which the human being, when entering into relationship with the world and with himself, overcomes the deficiencies and limitations imposed by his body, nature and culture creating new concepts and objects that extend beyond the perimeter of the individual mind, becoming, at least potentially, heritage of all Humanity. These creations allow access to new experiences, and become part of the psychosocial background of successive generations, thus expanding the evolutionary possibilities of individuals, during their life cycle and of the entire species in the long term.

Good or bad is the direction of each human action evaluated according to the highest plan of the destinies of our species, which has not finished its evolution and goes to unknown territories of the Cosmos and of the interior life. Good knowledge guides human evolution between attempts, failures and comprehensions, develops towards the complex and the universal, towards freedom and happiness, beyond the limit of death that still seems insurmountable.