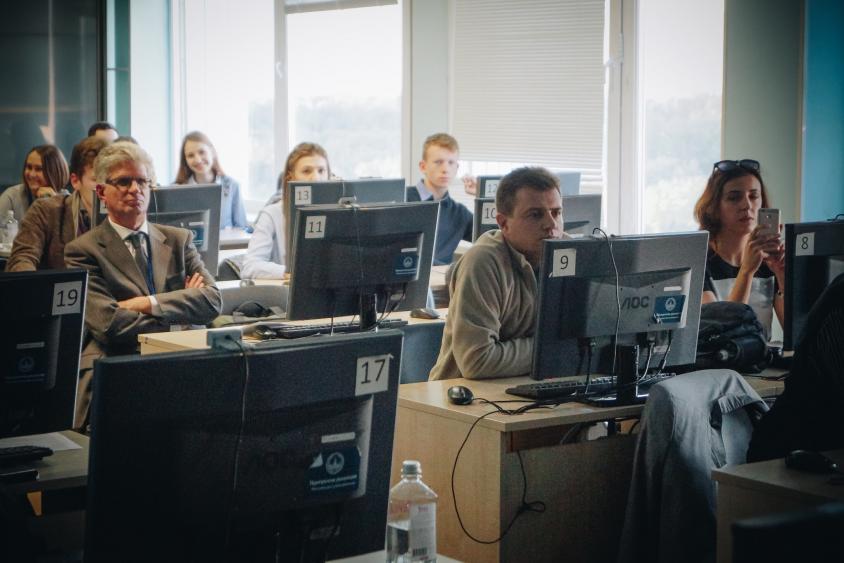 First of all, let me thank the Eurasian Center for Big History and Forecasting, and Lomonosov University of Moscow for hosting me in the stimulating context of the Third International Symposium on Big History and Global Evolution.

Special thanks go out to our friend Akop Nazaretyan for allowing Universalist Humanism to be represented here today.

We are not Big History experts but, as some of you already know, the Humanist Movement has long been investigating the present scenario and future potential of the human species. A species that is still to reach the culmination of its process, through continuous, ever-growing adaptation by transforming itself and its environment.

The brief presentation to follow will focus on the popping out of what now appears to be the most advanced expression of the global evolutionary process on this planet: human consciousness.

Since the first animal forms appeared on Earth, a primitive form of psychic coordination seems to have been guided by the instinctual approaching of pleasure and avoiding of pain. This is how the fulfillment of primary needs is still regulated so as to assure the continuity of the psychophysical system of all species.

With hominids, psychism starts expanding in order to offset environmental changes and temporarily stabilize internal processes, both biological and psychological. There emerges what we define as the registering and coordinating system of the human psyche, i.e., consciousness, which -in an intentional fashion- actively coordinates and gives a structure to the constant variations in the relationship between the psychophysical structure and the world.[1]

That said, let’s get into our subject. I’ll try to trace some of the most important evolutionary steps of human consciousness, describe -as far as possible- where we are standing now, and outline the future possibilities imaginably coming in when our species go through the new evolutionary leap ahead.

The study of Big History has clearly illustrated the critical moments of the process, which various authors have termed phase transitions or revolutions. The most outstanding feature of all such ‘crises’ seems to have been the substantial modification of the preceding system, so substantial as to create entirely new conditions, better suited for fostering evolution. As if the evolutionary boost had a creative capacity which was not restricted to the recombination of the existing elements within a system, but promoted the emergence of brand new, more complex ones.

The acceleration rate of phase transitions has clearly increased owing to the increasing complexity of systems themselves, and, in particular, with the emergence of human consciousness, a system which is substantially different from mechanical or biological ones.

The typically human capacity to delay the response to immediate inputs, and give significance and direction to actions by associating them with a predicted or imaginary future, presents wholly new traits as compared with the preceding systems. The broadening of its temporal horizon allows human consciousness to place stimuli at a perspective, in a complex mental space suitable for developing decision-making capacities, comparisons and results that go far beyond the immediately perceptual.[2]

Then there emerges the ability to intentionally break free from the conditions imposed by the system of origin, the awareness of having the power to “create” the world, and the rebellion against natural, mechanical determinism.

Several studies have shown that there are numerous events in history illustrating the capacity that humans have to modify the environment while continually expanding the potential of their psychophysical structure. A most remarkable example is the control of fire by our ancestors. There is not knowing how things actually worked out, but it looks quite unlikely that a mere animal, whose instinctual behavior would be to flee from danger, could have repeatedly come near an unmistakably threatening phenomenon until it became manageable.

Something happened in the primitive consciousness of those hominids, over the course of thousands of years, until they were able to imagine first and then develop a novel, seemingly unnatural, behavior. Something quite special must have happened in those “animals” that felt the urge to bridle and possess that divine flaming being, so much so that innumerable myths about the taming and use of fire have guided humanity throughout the ages. From Agni in the Vedic culture to the most recent myths about iron and metal works in the Mediterranean and Eastern cultures.

The realization that life is finite (unattainable by the animal psyche) brings about a different connection with the world, the intuition of an afterlife, and the search for a meaning that transcends mere biological survival. Right then ritual burial sites are erected for the first time; there surface myths about the worlds beyond -whether cherished or abhorred-, the belief in invisible forces, and perhaps a primeval awareness of the potential to imagine and plan the future in order to overcome the major deterministic factor: death.

The so-called Axial Revolution during the millennium before the rise of Christianity shows that, in a critical phase or human growth, there appeared -almost simultaneously and in different places- highly elaborated products of thought and human interiority, which denote that abstractive and speculative capabilities increase when consciousness starts reflecting on itself. Buddha in India, Zoroaster in Iran, the pre-Socratic schools in the Mediterranean, Lao Tzu in China… all attest to this.

We could also bring to mind the great architectural and artistic productions, the major technological revolutions from the most primitive to last-generation IT, language, the deep changes in the views about our universe and our concept of time, all stemming from a place within consciousness that challenges “natural”, codified rules.

As a species, today we find ourselves at an unprecedented turning point. For the first time  interconnections and communications have set the conditions for the rise of a planetary civilization. However, the inertia of the old systems of relationship, and the inability of political and religious institutions to respond adequately, have generated frays, fractures and contradiction in the social fabric and in the psychological environment, which manifest through violence, intolerance and images of a bleak future. No government or civil institution have the lucidity and the ability to analyze and modify this mechanical, destructive trend in society, while the individuals feel ever more helpless and restless before this dramatic scenario.

In our opinion, the continuous acceleration of transition phases and the planetary scope of the present crisis indicate that we have entered the initial phase of an inflection along the global process, where a wholly independent system should come out from the current “singularity”, which will subsume the most progressive features and leave behind the regressive or destructive traits of the former system.

If this were so, human consciousness would already be facing the challenge of significantly transforming the paradigms of our belief structure and, as a consequence, the interpretation of what we call reality. This way, those which seem insurmountable difficulties could become strong points for the new leap, and that which today is unthinkable would become conceivable.

We are speaking about a new stage of awareness of human consciousness at a global level, not just at the level of some individuals, a few mystics and academics we have heard of in history. A new evolutionary leap, a new broadening of consciousness springing from the capacity to reflect that is specific to the human being, the capacity to look at events and see oneself from another vintage point within, which is more lucid and rid of the constraints typical of a dying world.

A substantial modification, similar to what happened when our ancestors realized that fire could be tamed; or when Earth stopped being flat, and the sky became three dimensional; or when humans became aware they were alive and started to ponder on their own actions.

The answer, and the revolution that will necessarily ensue, is coming forth from the depths of human consciousness.

We can observe what has been happening in science, with radical viewpoint changes which were still unthinkable in a recent past: the outdoing of the Newtonian model and the introduction of non-deterministic elements in formal theories; the new role of time in the irreversible direction of macroscopic phenomena; the attempt at interpreting the world scientifically as from the dynamics of both events and observer; the try at a systemic approach to complex phenomena. Regardless of any theory in question, we are witnessing a major paradigm shift leading to indefinable possibilities.

We can observe that, notwithstanding the dramatic direction that events are taking due to the errors of those who apparently control the fate of humanity, uncountable scientists and millions of common people have resolved that this is not the world they want to live in, and have started to think and move in a different direction.

We can observe the younger generations with their new sensitivity, freed from the canon of old beliefs, in their quest for lighter forms of spirituality that will shed light on the meaning, the raison d'être of our species.

In each evolutionary leap the human species has taken over the course of its brief history, in each non-mechanical, non-linear evolutionary leap, in each intentional, insightful leap, human consciousness has demonstrated its amazing aptitude to tap into the unknown, and elaborate new formulations that have recreated reality.

Maybe this is why we are right here today: so as not to get trapped by pessimism, but rather contribute towards the rise of a new level of planetary consciousness, to take a further step towards freedom  -for the human being, for the entire cosmos- freedom from every form of determinism.

And then, maybe, death will lose importance.

Thank you all for your kind attention.

[1] Consilvio R. Time and freedom: the long evolution of human psychism. In: Proceedings of the 4th International Symposium of the World Humanist Center of Studies, Towards discovering humanness, Attigliano, Italy, 1-2 November 2014. Multimage Ed., 2016.