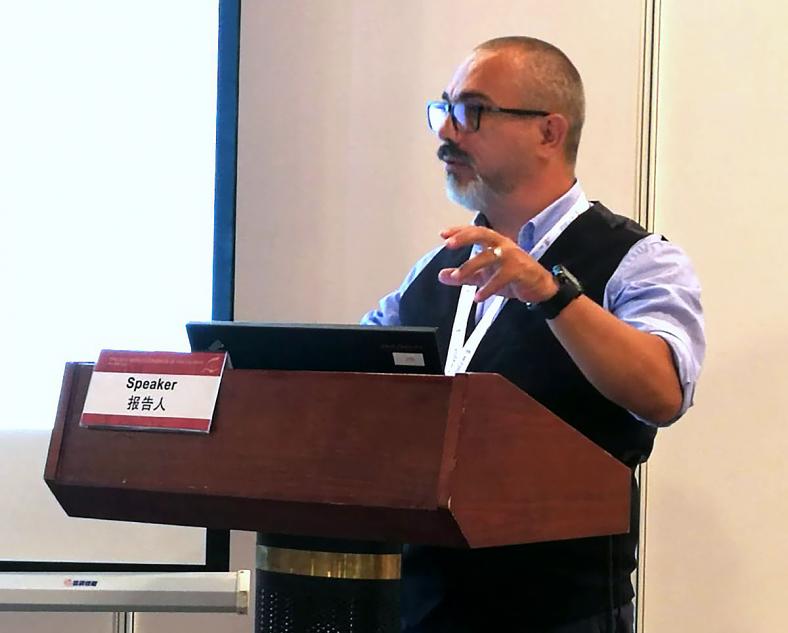 Still, I don’t think that there is anyone today who won’t say that we’re in a crisis. We could have various interpretations of crisis, but no one is exempt from the experience of finding themselves in a crisis. Beyond the enormity of the problems we have before us, the crisis seems to be hitting at a psychological level before any others. It’s a sensation of complete uncertainty. It’s as if there were no images of the future that allow us to face the challenges we’re dealing with today.

Most of us have been taught to think of revolution as an event bursting into the life of a human group, capable of changing its socio-political features in a somehow stable fashion. In our minds, revolution is something subverting the establishment.

Also, revolution is often thought of as a natural outcome springing from contradictions that affect a specific component of human life, be it social, political, scientific, technological, or religious.

For sure reasoning this way allows us to catch hints about a possible concept of revolution, but it is far from exhaustive in explaining what revolution is exactly, since it gives no clues about how a revolutionary phenomenon can be triggered by mere realisation of social contradictions, not to mention its characteristics and evolution.

Be it a natural or social mode – or even an inner state – no human action exists, which does not depend on thinking about our present or past condition as a prelude to what we would like to become. Human behaviour arises from our representation of our possible future. This glimpse of future sucks human action in, and consequently it influences what revolution was and will be.

What is said above urges us to redefine revolution, and asking ourselves a set of questions can help us accomplish this task.

The first question I’ll pose for discussion is:  Is a revolution just an overthrowing, mostly violent, of a group in power?

Human history is full of episodes of this kind; more often than not it’s a coup, a putsch. Power usually changes hands in a sudden and violent way, but the way power manifests itself does not change. In other words, the change only happens on the surface. Old tyrants have been replaced by new ones. So, an uprising doesn’t seem to be enough to qualify as a revolution.

Is a revolution the replacement of one “dominant” social class by another?

Here again, the simple replacement of one dominant social class by another isn’t enough to define a revolution. We need to see whether the class that’s taking power is able to carry out a change in the social order. We have to add that the awareness of being the oppressed class doesn’t guarantee anything in terms of a revolution.

In old understandings, class struggle was identified as the engine of history and human progress. Society’s structure was described simply as a fabric of relationships of production in relation to the means of production in which the class that holds the means of production opposes another. This other class, is functional and so an extension of the means of production. In this understanding, it isn’t human consciousness, the consciousness of the oppressed, that determines itself. It’s the social being, the social status, that determines human consciousness. Thus, human consciousness was reduced to a reflection of objective or “external” conditions that are determined historically. This negates all freedom of choice. In essence, that conception denies the freedom to choose between living and dying; freedom to choose between conditions. It ultimately negates the freedom to imagine a future that is possible through human action. But denying this means denying that which makes every revolution and every change possible. So, ultimately, it would be meaningless to talk about oppressors and oppressed, just and unjust, heroes and cowards, because everything would fall back within a pre-ordained process that negates all value judgement.

If we framed social history as a battle between human intentions, we could say that for the oppressed and the exploited to take power would be extremely significant. However, it would serve no purpose if the newcomers did nothing to eliminate completely the conditions of oppression and exploitation. A transformation of social order which doesn’t put human freedom at its centre wouldn’t be a revolution. In this sense, the means by which power is taken take on great significance, too. How can we possibly talk about a revolution if, aspiring to the elimination of violence, we incarcerate, torture and execute? Wouldn’t we be dragging with us once again the same violent scenario that we want to overcome? We can only conclude that knowingly adopting nonviolence as a methodology of transformation is indispensable to have a revolution. To those who object to the efficacy of nonviolence, we have to point out that we are talking about a methodology and, as such, something that is in constant evolution. So, where it may be defeated, its moral validity remains.

Is a revolution the transformation of the social order in a progressive sense? Is that all it is?

Is an evolutionary revolution possible without human beings’ simultaneous transformation?

Let me put it in other words: Where does this progressive direction that we aspire to come from, and within which this revolution should fit? We should ask ourselves how the condition for finding inside ourselves models that move beyond the past can arise from human consciousness developed in a violent context. If we imagined society and individuals to be determined by history, subject to given laws, we would be in a system in which it wouldn’t be possible for something new to arise. If the previous human being carried out the revolution, how would we arrive at a new human being? The product, in the end, wouldn’t be much different than the producer. So, all talk about revolution would end here, and we would just dismiss it all by drawing it back to the irrational. Only a conception of the human being as a being that is not pre-determined and is open to the future, and whose very nature is that of change; only an understanding that recognises human consciousness and the world as two aspects of a single, unique structure allows us to talk about revolution. So, in sum, no, there can’t be social transformation without the simultaneous transformation of the individual and vice versa.

But is the revolution just a change in human beings?

We started off by saying that the revolution is a transformation of the social order, and we arrived at understanding this as a simultaneous and deep social transformation along with the creation of a new human being. If a new human being were to emerge, then nothing would be the same. If that which changes is the source of all meaning and signification; if that which changes is the underlying psycho-social fabric, then the entire universe will have changed. To quote Gayo Petrovic: “It will be the creation of an essentially new way of being. A free and creative being, different from every other non-human or anti-human or completely un-human way of being.”

So, what is revolution?

The history of the human being up until now has not been linear nor progressive. Instead, we can see that there have been “leaps,” and we have often called these “leaps,” “revolution”. There have been attempts that ended up badly; others that were successful and brought profound changes. They were not an accidents of the history or deviations. Revolutions represent an act launched towards the future with the intention of overcoming the conditions of pain and suffering that human beings find themselves in, and of their social structure. If the human being is essentially time and freedom, then the revolution is nothing other than the demonstration of a way of being that is fully human. In this sense, what is human appears in its essence when carrying out a revolution. Again to quote Gayo Petrovic: “The revolution is nothing in and of itself. It has no contents, values or importance independent of the goal it sets. It is simply a transition to a higher form of being, a means that is justified by its end. In this way, it appears as a non-Being, emptiness, an abyss within Being, a cleavage that separates two real, truly different states of Being.”

In conclusion, this idea of revolution entails the conception of the human being as a phenomenon whose essence is not given a priori, but one that comes about through its action in the world. We refer to the human being as a historical and social phenomenon whose social action transforms its own nature. In this sense, what is peculiar to human beings is their ability to change. In this understanding, revolution – with all of its personal and social accepted meanings – should not only be understood as a simple option in the dynamics of human history, but as the manner in which the human being gets to know itself.