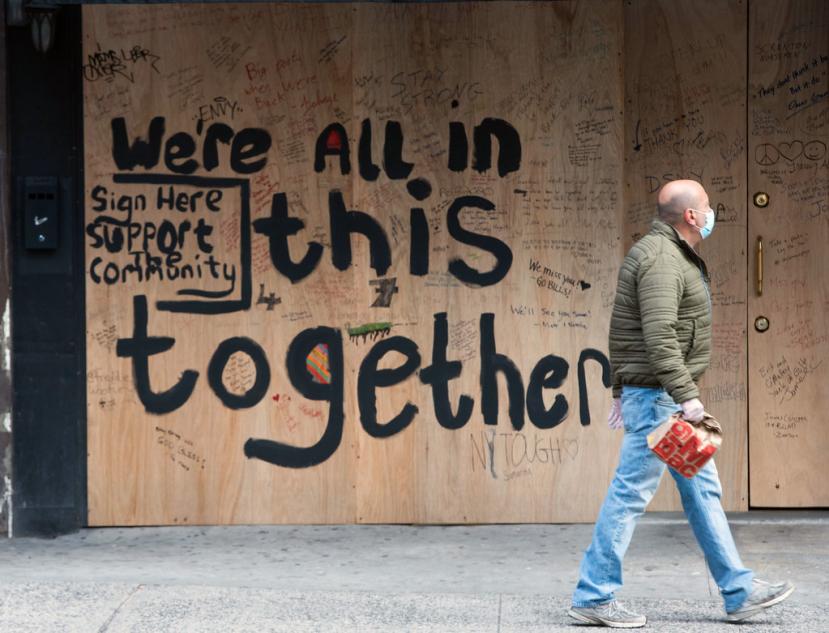 "...besides that, this is a moment of some agitation, but of course, not due to what is commented by the newspapers, the TV or the “opinioners”, but due to destinies being played in the heavens.  In which Heavens? Little by little we will go learning and little by little we will be calling at the doors that have to be called.  To finish, don’t believe that the world is in danger.  It is a disproportion to believe that some childish small firecrackers and other delights can stop the life and the intelligence in this planet.  They are merely growing measles of a childish specie, without being able to handle itself.”
“Sursum corda”, raise your hearts….
Silo

At the end of 2019 a new coronavirus appears, the SARS-CoV-2, with estimated lethality below other recent virus, but with high contagiousness in a long initial asymptomatic phase.  At the beginning of 2020 this illness, called COVID-19 was already graded pandemic, which allows to foresee a worldwide collapse of sanitary structures.  Initially, there is no known effective treatment and the possible development of any foreseeable vaccine will take more than a year yet, so, only physical distance and human movement restriction measures allow to mitigate the impact upon the health resources of the states.  This involves the stoppage or significant reduction of social and economic activities, which are considered as not essential for the survival of the whole social body.  Until an effective treatment or a vaccine appears, the biological path to the acquisition of group immunity may take a long time, at the expense of a very high number of direct and indirect victims.  A dilemma is set out between necessary care of health, as it was understood until now, or the maintenance of the economy.  This dilemma makes society heavily tense at the moment of this analysis, when a big amount of population is still held in confinement at their homes, but the foreseeable material consequences threaten to be devastating.  In this moment of huge uncertainties, in which there are no reliable forecast and when Science is still looking for solutions, we are performing this collective attempt to extract some conclusions, from the point of view of the New Humanism.
.
1.    Current situation

Due to the confinement and the physical silence that today surrounds a big part of the population, the internal perceptions occupy a bigger mental space and we become aware of desires and postponed wishes, sometimes appearing much creativity and also sometimes, contradiction and violence.

Facing the closeness of death, some priorities spring up such as life and individual health, as well as others.  It becomes evident the importance of the whole, through care and solidarity, and all this is making the individualism to retreat.

It is in front of finitudethat believes are teared down.  Things are happening which we never believed they may have happened, and a certain emptiness appears which allows us to look at reality in a different way.

On one hand, we can no longer live as if death didn’t exist. That illusion, that used to permanently go with us, has been broken.  Although this includes a feeling of instability, of great uncertainty and fear for the future. On the other hand,it helps us to live with more intensity the current moment.

The future has become unpredictable, it invites us to elaborate new answers, thus abandoning the linear perspective of the past.
The dark images of the future take place on daily basis, but the opportunity appears to produce meaningful changesin the own life.
Many people experiment a strong need of orientation, but this emptiness could be filled with more irrationality and obscurantism.
Nevertheless, the flag for life preservation is risen for the first time in the whole world simultaneously.  There is an aspiration to rebel against deathand against the absurd nihilism it represents.

The fact that today Humanity is perceived more united is giving us a certain hope.  The cohesion has increased between individual consciousness and this increases the conscious unity of the whole.  It could be said that Humanity has realised of its own identity.

The previous short-term vision has given away to a Universal representation where everything fits.  Suddenly, each one exists and is important for the others. “We will be saved together or nobody will be saved”.  The time of confinement has shown that another type of life is possible, paving the way to reflection.  The need for a better world has been installed in the human whole.

At social level we find ourselves with a landscape never seen before, which is nowadays seen by everybody.

The evil machine that was this system, apparently invincible, begins to crack down.  The economy gears are clogging, and the system of social and economic relations is seen threatened.  The opportunity for a change is opened, a window towards a new dawn.
Same as before, but now in a strongly way, two mental directions are evident:  one is solidary and places the human being as central value; the other keeps being individualistic and places the economy – the profit as a primary issue.

New guidelines are progressing in diplomatic relations, and the WHO becomes a worldwide reference.  A ceasefire on military conflicts is observed in different areas of the planet, as well as cancellation and revision of important military maneuvers.

In the countries ruled by the right, it was initially proposed to avoid social isolation measures, in order not to stop the economy, and “that each one would decide what to do in front of the epidemic”.  This individualistic style “solution” was proposed, but the following avalanche of infections and deaths, clearly made it clear that there was no room for individualistic solutions.  They had to go backwards and return to the old state that until recently they intended to dismantle.

The pandemic has highlightedthat this dismantling of the state resulted into the deterioration of the public health systems. The population remained helpless, which we should not forget when we manage to emerge from this crisis.

Analyzing the ample range of time during which the development of life in the planet was produced, diverse researchers have concluded that precisely during this century we are reaching a “singularity”, after which nothing will ever be like before.

The life evolution of four thousand million of years have to be resolved in the next decades, for better or for worse, and the answer of the specie no longer depends on biology but on the development of its consciousness.  All along the evolution of life, it can be noticed a tendency to gain more autonomy, expressed in the self-organizationhallmark of the living beings.  It is a tendency to freedom, which reaches its more developed form in humanity, abandoning the mechanism of nature, redrafting intentionality as its “evolving arrow”.

A change is possible, but do we want to return to the previous normality?  Could we distinguish between evolution and regression?

What will happen after the pandemic is stopped?

Certainly, there will be a struggle between those who want to achieve a system change and the elites that will attempt to maintain their privileges.  The humanists are among the first ones.  We aim to the Universal Human Nation.
The Universal Human Nation project will be able to concretize itself as long as human being will be established as central value.  This is a change that must be produced in the consciousness of broad layers of the population, in order that differences such as ethnic, national, ideological, confessional, social classes, etc. may become secondary factors versus the essential equality that entails to belong to the human species.

We believe that the events that are taking place these days facilitate the process of change aforementioned, since on one hand they paralyze the everyday emergencies, thus enabling a state of reflection, and on the other hand, they highlightthis experience and the common threat for all human beings, independently of the differences that may exist between them.

A possibility of change opens in humanizing direction.  It is the possibility to recognize ourselves as species and to produce a leap in the consciousness level.  If we consider “humanity” as a “developing being” we will see it is an emerging being in the stage of integration, in a stage of growing complementation.  To reach the beauty of the Universal Human Nation it needs to “awaken” and eliminate its internal contradictions, that is to say, the wars, famines, massive migrations, the unbelievable economic inequality and all sorts of violence in general.  This will only be possible with a massive leap in the consciousness level.

Current situation helps in this respect, since besides enhancing the perception of humanity upon itself, it has produced a strong growth of the solidarity value.  Let’s remember that solidarity has been constantly going backwards during the rise of neoliberalism.   Suddenly, this tendency has started to revert and many people have understood that “giving is better than receiving”.  The moment demands thiscomprehensive and community look.  The exchange, the common support, the convergent spaces, must be favored.

The best of human being will come to light when the Golden Rule spreads out as a reference:  “Treat others as you want them to treat you”

Meanwhile, we can point at some concrete proposals that might be useful as intermediate steps to move forward to the Universal Human Nation:  public and free health and education, universal basic income, reduction in the arms race, redefinition of the armed forces role, drastic cutback in greenhouse gases, development of non-conventional renewable energies (wind, solar, etc.), growing respect for Human Rights, greater prominence of worldwide coordination organisms and transformation of the Security Council of the United Nations.  In general, we will have to prioritize the “growing” of people (health, education, quality of life) upon the growing of “things”.

As guiding principles of the social transformation, at medium and long term, we propose:  1 – review the relationship between capital-work, 2 – transformation of current formal democracy into real democracy, 3 – decentralization of political, economic and administrative power, 4 – recovery of a non-destructive relationship with nature.

Let’s try to see a bit beyond the current moment… opening the future.  As we have already commented, numerous evidences point out that the evolutionary process that has brought us up to here, is reaching its end.  As a result of this process, a new human being must emerge, with other values, other sensibility and other level of consciousness.